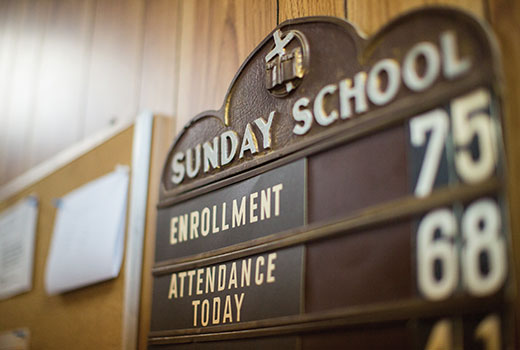 At a Westminster Chapel discussion group in 1944, the topic of numbers came up and many were concerned. Attendance had dropped due to WWII, and many “doubted whether the plain services now established, with forty-five minute (or longer) sermons and not even an organ…would ever bring back the numbers which once crowded the building.” A woman name Mary-Carson was in attendance that night and she wrote about the meeting years later. She states:

“The question was admitted for discussion, and members of the group began making suggestions along the lines of more music, livelier music, special musical numbers, shorter sermons, sermons not so deep, more variety in the services, etc. I was listening to all this with mounting consternation, and when, in response to the idea that the church members could help fill the galleries by inviting others to the services, someone said that such invited visitors would not return a second time if they did not enjoy the service, I was finally constrained to raise my hand and request the floor. I do not recall my exact words, but I presented myself as one who had come among them as a stranger, had come a second time, liked everything that I saw and heard, and was obviously continuing to come. I said that for my part, no changes whatsoever were needed to keep me coming. Dr. L-J smilingly thanked me for ‘the first kind words I’ve heard this evening!’ He then rose and asked the group what they would say if he told them he knew a way to ensure that every seat in the Chapel would be filled on the following Lord’s Day. He assured them he did, in fact, know how this could be accomplished. ‘Tell us, tell us!’ they said, and ‘Let’s do it!’ ‘It’s very simple,’ he said, ‘simply put a notice in the Saturday edition of ‘The Times’ that I shall appear in the pulpit the next day wearing a bathing costume!’ This was followed, of course, by a period of shocked silence. He then went on to expound the biblical basis for proper worship, using as a counterpoint the error, then just beginning to be prevalent, of introducing various forms of entertainment into the worship service as a means of enticing people to attend.”

6 thoughts on “Lloyd-Jones on Numbers”